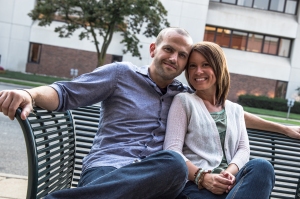 I haven’t hid my goal of this blog series.  The Ken and Barbie facade must be broken.  We have to realize that perfect scenarios lived out in cartoons and romantic comedies are not real.  You are an imperfect person who married another imperfect person.  The comparing game must stop!  Stop gawking at your friends “perfect” marriage! Stop wishing you had what was in the movie! Start living out the journey with your spouse and enjoy the ride. One more time: stop comparing your marital journey with someone else’s trek.

Part 3 – This is not who I married

We dated for 3 years.  It would have been longer but, out of fear of long-distance relationships, I broke up with Anne.  To make the matter worse, I broke up on the day she was baptized.  It was both a stupid decision and very poor timing to say the least. We have been married coming up on 15 1/2 years now.  There’s a lot I could say about our marriage.  It started somewhere between 5-7 years of marriage. It’s the one thing that I can say with absolute certainty:

This woman I am married to…is not the same woman I married.

I try to not speak for Anne.  But I’m sure that I could speak for her with absolute certainty on this one statement:

The man she’s married to…is not the same man she married.

On May 23rd, a very young, innocent, and very naive couple made vows to each other. Anne had just turned 20 the month before.  I was 22, a year out of college, and fresh into ministry.  We thought we had life figured out.  I use the word “naive” specifically because when I look back at our journey, both Anne and I did not understand as much as we thought.  We underestimated what ministry and marriage were going to bring to our “happy” home. We lived in this idealistic distortion of what the truth really was. To use an age-old cliché: We saw the world through rose-colored glasses.

This is the point where so many get tripped up by the “newlywed game”. What’s that game you ask? It’s when we long to go back to the simpler honeymoon times of our relationship.  It’s when discontent, frustration, and regret try to invade our mind and our first reaction is to hit the reset button.

“I’ll just call it quits on this marriage and start over.  I’ll meet someone new and it will be wonderful and exciting.”

PROBLEM: It’ll be exciting till you get past the honeymoon phase of that next marriage and you find yourself, 5-7 years later, in the exact same spot you left the first one.

We look back at the beginnings of our marriage and we see so much new excitement.  There’s the thill of discovery. Idealism is so blinding that you fail to see issues as being issues. Leniency flows like water as you both are caught in the aura of infatuation.  Truth be told, we ignore so many things thinking either they’re no big deal and/or it’ll straighten itself out.

A few years goes by…then it hits. (Cue the song “Back to Life…Back to Reality”) http://www.youtube.com/watch?v=TB54dZkzZOY

You realize this person is not the person you married.  The habits and idiosyncrasies did not disappear like you thought.  He/she doesn’t have the patience he/she used to have.  There’s not as much sex as there used to be. Flowers and chocolate don’t fix everything.  You thought marriage would fix things.  It’s only put issues on steroids. You find out opposites don’t attract.  Opposites attack.

You clash over things. You begin to argue. You experience disharmony Why? You figure out you are not as much the same as you thought you were. You are really quite different.

Why is this such a big deal? Because this is where most, say “we discovered we just weren’t compatible” and they call it quits. (For those individuals, please read “The Myth of Compatibility” that I wrote back in May.) NO BODY IS COMPATIBLE. If you agree on everything, then one of you is not necessary. Here’s a TRUTH I want you to embrace:

Your marriage is WAY RICHER because you’ve married to somebody who is much different than we are.

That is a very good and wonderful thing. The differences, the stress, and the struggles are not mean to pull you apart.  It’s meant for the two of you to work together to strengthen the marriage. This is where longevity and health are born.

Think of it as someone training for a marathon.  You don’t run the 26 miles overnight.  You work toward it step by step and mile by mile.  Sometimes there are injuries along the way. Other times it feels like nothing could go wrong. Some miles are run uphill in the midst of storms and are in no way fun to endure. But you can’t get to the goal without the journey it takes to prepare you for it.

How do I deal with this?

First: Take the time today to find ways to open up and get reconnected. To get your life reconnect is to start with a sturdy foundation of Christ.  It’s from that you two can then reconnect to each other. James 5:16 says “Therefore confess your sins to each other (start talking) and pray for each other (get connected) so that you may be healed.” Open up to Jesus…open up to him/her…let the healing being and rediscover who you married.

Take off the rose-colored glasses off without losing the roses.

What that means is push past idealistic and unrealistic expectations and embrace your spouse.  I’m not talking about excusing sin.  I’m talking about getting over bitterness, anger, and unforgiveness that has developed because “he/she isn’t the one you married.” Ephesians 4:31-32 says to “Let all bitterness and wrath and anger and clamor and slander be put away from you.” By taking of the “rose-colored glasses” you’ll indeed see that he/she is exactly the one you married. You just now see in a deeper, more realistic, way.  You see them as they are, faults and all.

But as you remove the rosy goggles, don’t “lose the roses.” What I mean by that is what roses always signify in a relationship. Whenever roses are presented (especially in a dating relationship), usually “pursuit” is being indicated.  Someone is presenting flowers to convey love, apologies, intimacy, or friendship. Remove your idealism and pursue your spouse to know and experience them as they are.  Don’t lose the roses/pursuit.  Look at your spouse and pursue them in the way you would want to be pursued.

I can’t promise this will be the last time you go through a tough season. But I promise these seasons will be profitable when you both approach it with the proper foundation and strategy of pursuing Christ and each other.

It’s so true that “this is not who I married.”

The Anne I’m married to has proven to be a vintage that has more depth and value than I ever could have dreamed 15 years ago. Yep, we’ve had some seasons that have sucked to go through. But the greater the struggle, the greater the vintage produced.

I love this girl.