I think my wife and I have hilarious conversations. It  goes back to our philosophy in marriage: The two essential elements to a good marriage is Jesus and laughter.  Both items have helped lead us through tough seasons of marriage and have faithfully brought us through.

In a conversation a few years ago, we were talking about how people act in a certain ways because they’d been “conditioned” to act that way.  In other words, because of seeing an action over and over, the person was responding the same way every time.

Then she said it.

“Palpatine...he had a dog he conditioned to act a certain way.”

“Babe, I think you mean Pavlov. Palpatine was the evil emperor on Star Wars and I don’t think he had a pet.” 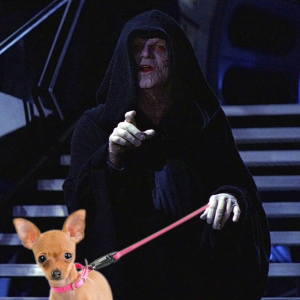 I have no idea what brought that conversation back to my brain, but it began to stir a thought in me…

Have we “conditioned” our spouses actions? Let me explain.

Pavlov is well known for an experiment he developed. He had learned then when a bell was rung in subsequent time with food being presented to the dog in consecutive sequences, the dog will initially salivate when the food is presented. The dog will later come to associate the ringing of the bell with the presentation of the food and salivate upon the ringing of the bell (thank you wikipedia). This is called “Classical Conditioning”.

I hope I haven’t lost you.  Hang with me for a sec.

There are couples that have been stuck in a rut because there is a refusal to grow through circumstances.  Every situation and season that your marriage goes through is opportunity to learn and strengthen so that the two of you can mature.  But the problem lies in the failure to see that some of the reactions of our spouses, that we don’t like, may NOT be their fault.  We’ve just conditioned them to be that way.

Through everyday actions, reactions, moods, and personality quirks, we can literally “condition” our spouse to respond in specific  ways.  You’ve wondered why he/she reacts like that.  It could be that, because of what they’ve received from you, their response is purely out of a conditional mindset.

A wife who doesn’t want to be touched by her husband because he’s conditioned her that the only time he touches her is when he wants sex.  In their relationship, there’s not such thing as a non-sexual touch. Fights blow up because he just wants to put his arm around her.  She read it as him getting “frisky”.  He calls her fridged.  The reality: he’s conditioned her to see that every time there’s physical touch there’s sexuality attached to it.

A husband who doesn’t talk much.  He doesn’t open up to his mate because her first reaction is to tell her mom/sister/family what he’s dealing with.  There doesn’t seem to be a safe place to share anything that can make a man feel a bit vulnerable. Communication begins to shut down. She says he’s closed off and defensive. The reality: she’s conditioned him to feel that, even in his own home, there’s no safe place to trust what is in the recesses of his heart.

(We’ll keep this one general) A spouse is getting upset because he/she is  not getting what they wants.  Anger rises when they want something and their spouse says “no”.  For the past 10 years of marriage, he/she always gets what they want.  Sounds like complete selfishness right? The reality: The whiny spouse has been conditioned to be selfish because there hasn’t been a healthy balance of “yes” and “no” from their spouse. In fact, the spouse doesn’t know how to say “no”.

I cannot count the amount of conversations with couples where there is a situation where one of them is fed up with the other over circumstances that have happened because they’ve simply “conditioned” their spouse to respond in that manner.  I’m not writing the “conditioned” spouse a free pass to keep acting that way.  What I am challenging both of you to do is take a step back and take some inventory on the reactions you are getting in your marriage.  Because if you don’t, I’m concerned that one or the other will get “vexed to death” in your marriage, get wore down, and plummet to failure.

Ask yourself:
– Has your spouse always acted that way?
– Is this ALWAYS my reaction?
– Has there been open communication about why the reaction is there?
– Does your spouse recognize the same reaction that comes from you? (don’t assume he/she notices)
– Am I willing to admit that I am guilty of “conditioning” my spouse to act that way?

None of us are perfect in any way. But that shouldn’t  be our excuse to wanting to grow in and through situations.   Whether you’ve been married for 6 months or 60 years, don’t stop growing.  I’ll give you a simple TRUTH about that:

A marriage that refuses to grow is deciding to die.

Keep pursuing each other. Stay humble before God and your spouse.  Keep taking inventory in your life to make sure that the responses and reactions are not all the fault of your spouse.  Own up to your own shortcomings and foster an atmosphere of offering and receiving forgiveness. Work at it together and watch God bring joy and blessing into your marriage.

One response to “Pavlov’s Spouse: A Marriage Blog”